On Sunday myself and my friend organised a surprise outing for a mutual friend of ours for her 30th birthday. We told her she needed to be ready at a certain time and we would pick her up for her adventure. In the days leading up to the surprise we began giving her instructions such as “Don’t eat too much before our activity.” and “Bring a spare pair of comfy clothes.” The second, as well as many other ridiculous requests, were just to put her off and stop her guessing however the initial clue, which was a teabag, may have given her a good idea.

We took her to The Spiced Pear in Hepworth, a vintage inspired tearoom and bar in the middle of the beautiful Yorkshire countryside. They’ve recently been crowned Best Newcomer in the Yorkshire Life, Food and Drink Awards and it’s easy to see why.

As we arrived we walked through a secluded outside seating area decorated with fairy lights and a water feature. On entering we were greeted by a grand piano being played softly by a man in a suit. It immediately set the tone for the afternoon and made our friends surprise seem all the more special.

After studying the menu we all opted for the Afternoon Tea with one gluten free. They also offer a “Gentleman’s Tea” which consists of scotch eggs, pork pies, dripping, Yorkshire Puddings and pickled onions. One of these were brought to another table and they looks delicious!

All the teapots and cups are miss match and vintage, adding to the overall feel of the venue. When our food came, well, it could only be described as A Thing Of Beauty:

The sandwiches were smoked salmon, ham and egg mayonnaise. All freshly made, all homemade and all very, very tasty! 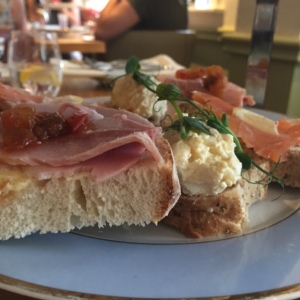 The puddings were: trifle, chocolate cake, scones with clotted cream and jam, a fruit tartlet, Victoria sponge and a meringue. I thought I had died and gone to heaven! I am usually the type of person who eats fairly quickly but with this, I took my time. I didn’t want it to end! My friend reported that the gluten free option was also fantastic and quote “didn’t taste like it was gluten free”.

As three mummies who work together as teachers, we usually meet on playdates where we run around after our toddlers or we are at work, running around after others children (joke! Well kinda.). It was wonderful to be able to sit and chat with amazing food in a lovely location and we left The Spiced Pear throughly relaxed and satisfied. I will definitely we returning…maybe as a reward for hitting my target in Slimming World!

Previously the writer of Educating Roversi, Becka is a 30 something Mum to two and has an addiction to mugs, Disney, pyjamas & stationery. Welcome to the Bubble!
View all posts by Becky Roversi →
This entry was posted in All Posts, Reviews. Bookmark the permalink.