This time last year I wrote about how my friend (RW) and I had organised afternoon tea for our friend (LF) for her 30th birthday party. It’s become a little tradition whereby we visit different establishments testing our their sandwiches, cakes and other treats a couple of times a year for our birthdays.

This summer, to celebrate mine and LF’s birthdays back in June which are only a week apart, we visited The Fox Bar and Bistro in Ripponden for a few hours of indulgence. You may ask why we have left it so late to celebrate our birthdays? Well LF had her second child and was well into the newborn stage so we decided to wait until he was a little older. 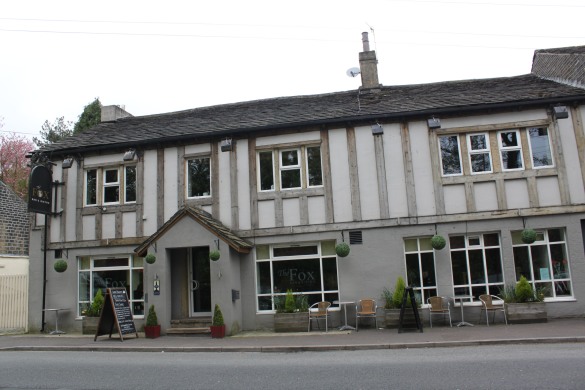 Image taken from The Fox Bar and Bistro Gallery

The Fox Bar and Bistro advertises a picnic bench style afternoon tea that changes with the seasons. They ask you to pre book and I could see why when we walked in. Every table was full and quickly filled up as others left, most were also having the afternoon tea however a few were sampling the Sunday dinner which also looked fantastic. In addition, they also have a 2 for £15 deal on bar meals and an A La Carte menu, a sandwich menu and a Tapas Tuesday! Lots of variety for all tastes.

We were greeted by a friendly guy (whom I assume was the manager) who asked us if we’d eaten a big breakfast as we’d need to room for our cakes and other goodies. As seasoned Afternoon Tea eaters, we were well prepared for the intake of savoury and sweet delights that The Fox had to offer. We were given plenty of time to chat before our order was taken and the manager suggest we have our tea half way through, which we decided was a good idea, so ordered some soft drinks initially. We would have loved to have samples the cocktails (apparently they do a mean Porn Star Martini) and Prosecco, however two of us were driving…so we’ll save those for another visit!

When our picnic bench arrive we were suitably impressed. Visually it’s cute and fun with the little bench hosting an array of savoury and sweet treats. I commented that the bench would have been a perfect table for Baby Bob, Mini R’s dolly…apparently despite the afternoon way from my Mummy title, my mummy brain doesn’t quite shut off!

The table consisted of: 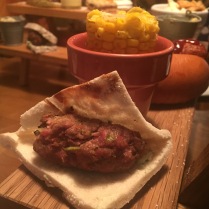 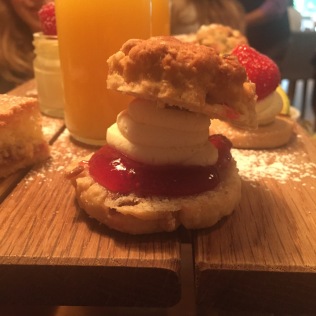 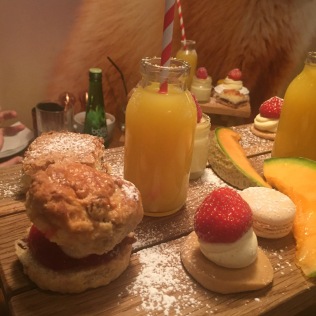 It was really nice to get an afternoon tea where the savoury side wasn’t just sandwiches. I really enjoyed the hot-dog and was pleasantly surprised by the Caesar Salad which isn’t usually my taste. It was all incredibly tasty, however the Lamb Kofta was a little spicy for me. I am a wuss with spice! The additions of the coleslaw and corn on the cob made the whole thing a little lighter and less heavy which meant it was easier to devour the sweet options that followed.

RW ordered the gluten free version and she was very happy with her meal. Everything was pretty much the same apart from the addition of gluten free bread, some kind of date cake and a meringue nest. She saved her lemon posset until the end as it was her favourite!

Her order came on a smaller picnic bench which was incredibly cute! The Fox Bar has a range of teas to choose from: LF ordered a green tea and RW and I ordered a breakfast tea which came about half way through our meal which was perfect timing. After a few minutes of chatting, eating and drinking, both RW and I commented on the strength of the tea. Despite adding copious amounts of milk it was still an incredibly strong cup of tea, when we looked there were EIGHT, yes EIGHT teabags in a tea pot for TWO! All was explained! The manager caught me counting the tea bags and asked if everything was alright then informed us that they didn’t want people to have weak tea so liked to ensure a good cup of tea with plenty of tea bags – fair enough, it was a little strong for our taste, but another teapot of hot water and extra milk sorted us out. 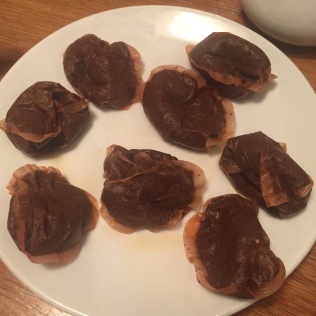 I’m a lover of a good scone so that was definitely my favourite however I enjoyed the coconut square too…in fact I enjoyed it all! I was suitable stuffed by the end. The atmosphere and environment was lovely, the service was friendly and professional and the food was tasty and well presented. Yes, the tea was strong and occasionally the staff whipped things from our table before we were done but I’ll happily be returning to sample more of the menu and maybe another Afternoon Tea.

I have not been paid to write this post. All words and opinions are my own!

Previously the writer of Educating Roversi, Becka is a 30 something Mum to two and has an addiction to mugs, Disney, pyjamas & stationery. Welcome to the Bubble!
View all posts by Becky Roversi →
This entry was posted in All Posts, Reviews. Bookmark the permalink.

6 Responses to Review: Afternoon Tea at The Fox Bar, Ripponden.