Pregnancy Diaries – What To Expect Whether Or Not You’re Expecting.

I’ve been a little rubbish with writing posts recently. With the tiredness of pregnancy plus the recurring headaches & migraines I seem to be getting, my new love of face painting and general busy life, getting time to write seems to have shortened to practically nothing.

This post has been on my mind the last few weeks. Inspired by the experiences I seem to be having daily and also the unfortunate experiences my lovely friend has had.

The general theme comes down to one thing…members of the human race not thinking before speaking. Something which happens quite a lot in general, I assume, but that I notice so much more when I’m pregnant.

You may or may not know that I am 27 weeks pregnant with our second child. I can’t complain overall and I know I’m incredibly lucky to be expecting a second child but this one has definitely been more difficult that the first and I feel like I’ve been pregnant forever! 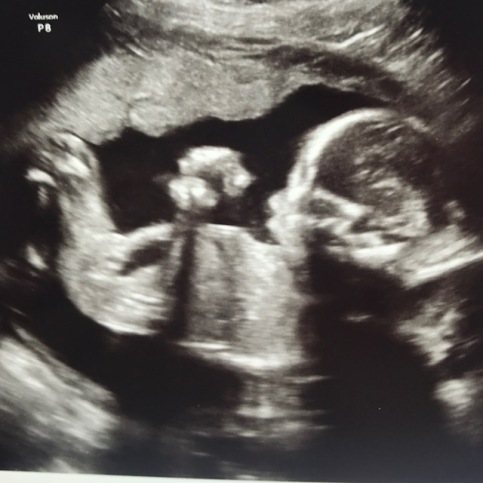 When pregnant with my son I always said I needed a t-shirt to wear with the answers to the questions that I regular get asked, sometimes daily.

“How far along are you?”

These are questions that I’m completely fine with, it’s the response when I answer that I’m never sure how to take. Usually a wide eyed facial expression, an expression of shock. In fact, the first time it happened was the lady serving me in Matalan who just openly said

I wasn’t even 20 weeks and had felt bloated and big from day dot so the last thing I needed was some stranger (whose job is supposed to be customer service!) telling me how big I am.

Quite honestly, given that I ache, I can’t get comfy on a night, my tummy feels uncomfortable and I regularly want to chop my head off with the pain it’s causing, calling me “big/huge” isn’t going to do anything other than make me want to punch them in the face.

With all these experiences recently it got me wondering…

Why, the hell, do people think they can stay anything to a pregnant lady and it be okay?!

My best friend, whom I wrote a post about, was called “colossal” by a mutual colleague. I mean, seriously, when is it ever okay to call anyone, let alone a female…a pregnant female that? I told him as much and he had learnt his lesson – ha ha!

The whole “Are you sure it’s not twins?” question really infuriates me! Technological advances mean that multiple births are not a shock anymore, that person is basically finding another way of saying “You’re huge.” and I have to bite my tongue not to with a sarcastic, witty comment about their appearance.

Crazily (and unsurprisingly this has never happened to me) you also get those women that are lovely and petit (whilst I have been called lovely, I’ve never been called petit…in fact, baby elephant might be more appropriate). These ladies have a neat, little bump and yet AGAIN, people feel the need to comment!!!! “Are you sure baby is big enough?”, Are you eating enough?”, “Where’s your bump?” Apparently the pregnant woman of the modern age can’t win with regard to bump size.

I said that the beginning of this post that it was also inspired by a friend of mine but has, unfortunately, experienced people not thinking before they speak far too regularly recently. This wonderful lady is part of my “mum friends” and one of the great women I met through my NCT course when I was pregnant with my son. She has two beautiful girls, aged 3 and 1, and has been upset by people asking her if she’s “expecting” SEVEN TIMES over the last month or so. Having been on the end of this question when not pregnant, I know how it feels so to be asked, but that many times? Well quite frankly I wonder how she’s not snapped at someone yet!

Let me tell you that my friend does not look pregnant. This is not me being biased, I like to think that our NCT bunch have a friendship based on honesty (as well as babies, poop, tantrums and sick) and we would tell each other the truth. Yes, her body isn’t the same as it was 5 years ago but whose is after two pregnancies, two births and two lots of exclusive breast feeding like my friend has? It may not be the same body but there is no baby bump! Alternatively, what if there was but she wasn’t ready to announce it? (Not the case in this situation but could be for others). Hilariously, the suggestion in our WhatsApp group was to respond with…

“Are you expecting a punch in the mouth?”

I WISH she would say if it happens again, but my friend is too kind for such responses.

This post has ended up being a bit of a rant but one I won’t apologise for. I feel strongly about the fact that people seem to think it’s okay to say whatever they like to pregnant woman and some members of society still feel it’s okay to ask if someone is expecting a child. If a couple of people read this post and actually think before those words pop out of their mouth, then I have done my job and will be happy.

So what about you? I’d love to hear your experiences of people saying inappropriate things to you! Did you have any witty responses? What question really gets on your wick? 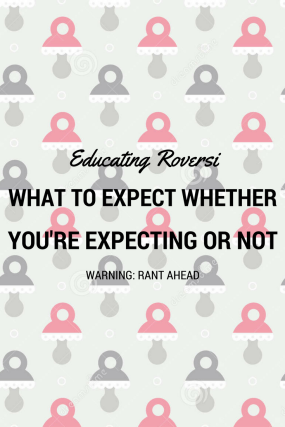 Previously the writer of Educating Roversi, Becka is a 30 something Mum to two and has an addiction to mugs, Disney, pyjamas & stationery. Welcome to the Bubble!
View all posts by Becky Roversi →
This entry was posted in All Posts, Pregnancy. Bookmark the permalink.

7 Responses to Pregnancy Diaries – What To Expect Whether Or Not You’re Expecting.