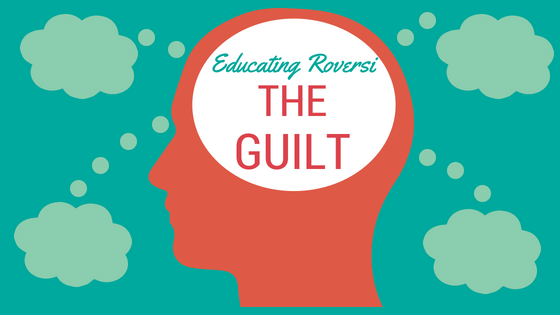 Mum Guilt…that’s what a phone in on This Morning centred around. Stemming from the fact that one of the Kardashians had left her two month old baby to go to Coachella festival.

Firstly I have issues with the fact that so many things that should be relevant to parents in general are associated with Mum’s only. Whether you’re a Mum or a Dad, the guilt is real. Also, I’d posted on my Instagram stories that they may as well devote the entire programme to it because, let’s be honest, Parental Guilt isn’t just about leaving them is it? It literally embodies every part of being a Mum or Dad.

Our son was born (on my birthday) in June 2014 and, for the first three and a half years, there were many times when I felt guilty: the first time I gave him formula after successfully breastfeeding him just so others could put him to bed, the first time I put him in his own room (at just ten weeks old), when I gave him a jar of baby food instead of making my own, when I left him with my Mum babysitting so I could go out, when I started him at nursery…the list is endless.

Since our daughter arrived in December 2017, I’ve found that the guilt has developed to a whole new level. As a parent to my son alone, although I felt those feelings of guilt creep up now and then, they were never a dominant part of life and I was able to push them out of my head, knowing that I was doing the best that I could. Since becoming a parent to two, those feelings have double and are experienced almost daily. Most are in relation to my son and daughter and the way they are treated.

See, even now I feel the need to justify my decisions by writing in italics to explain it. Sometimes it feels like my daughter just gets moved from station to station: activity mat to bumbo to jumperoo (aka “circle of neglect”) to bouncer, because I’m cooking, doing washing, tidying up or some other mundane job that needs doing. My daughter is still exclusively breastfed. I have no issue with formula, I used it with my son, but she has done so well on my milk I don’t see the point in paying for something I can get for free. I’ve been out a couple of times and left a bottle of expressed milk. We go away for two nights in August for a wedding and I’m already feeling guilty about leaving our daughter over night far earlier than we ever left our son and (irrationally) will feel guilty if, on top of that, she can’t have my milk so I’m already trying to get a stash in the freezer for that.

Mainly the guilt is the comparison between my son and daughter and how they are treated, wanting it to be as equal as possible as they grow up. I’m not an unreasonable person and, for the most part, I know all my worries are silly. However that doesn’t stop me from feeling it.

When I think about it, I guess it parental guilt comes from us all wanting to do the best we possibly can for our kids because we care but I also think it comes from society who have become so much more judgey! Parenting is such an individual thing. We all have our own beliefs and morals which we want to bring our children up by. We also all have children that are completely unique, meaning that despite all intentions we have about the way we would like to parent, sometimes it doesn’t happen like that. We are our own worst critic so that last thing we need is others adding to that.

I know a lot of Mums. I know a lot of unbelievably fantastic Mums. But I don’t know any perfect Mums…and that’s okay! The moment that little baby is placed in your arms, a seed of Parental Guilt is placed in your head and there is nothing you can do about it because the majority of it is completely out of your control! The media and other people feed and water the seed and it grows so, despite being exhausted physically, we end up exhausted mentally too.

The guilt will never go away. No one is perfect. Shit happens. The good thing about it is that it shows we love and care for our children. What it shouldn’t do is take over your thoughts completely. Go easy on yourself. You’re doing the best you can and that is the logic that Katie, from Hurrah for Gin, talks about. The logic that is in our brain and we just need to remember to use occasionally. 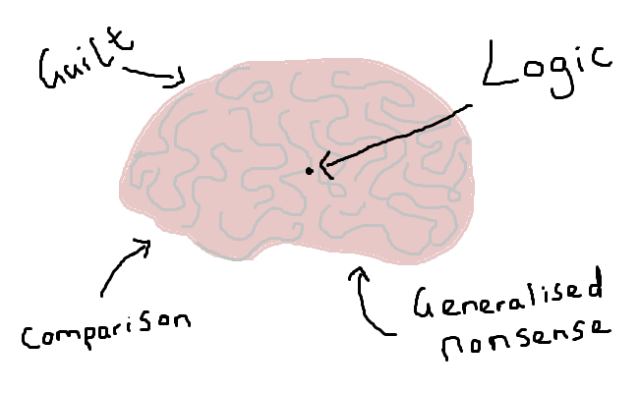 And as for the Kardashian who went to Coachella, who wrote the rule book on when you should and shouldn’t leave your newborn?!

Previously the writer of Educating Roversi, Becka is a 30 something Mum to two and has an addiction to mugs, Disney, pyjamas & stationery. Welcome to the Bubble!
View all posts by Becky Roversi →
This entry was posted in All Posts, Parenting. Bookmark the permalink.

13 Responses to The Guilt